Po' Boy sandwiches are Louisiana's gift to the rest of the country. It consists of crusty French bread, chopped lettuce, thinly sliced red onion, seafood or meat, and a spicy Creole sauce.The sandwich in the background is made with oysters and the one in the foreground is made with shrimp. 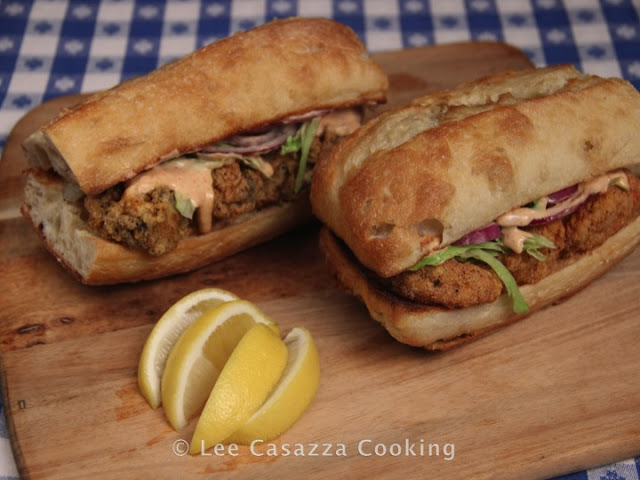 Po' Boys
French Bread
1 T softened butter
Creole Mayonnaise (recipe follows)
A small chunk of Iceberg or Romaine lettuce, finely chopped
A few slices of red onion
Avocado oil or peanut oil, for frying
Lemon wedges
1 large egg
1 T water
1 cup corn flour
2 T Creole seasoning
1 t garlic powder
1 t lemon pepper
1 t sea salt
1 t cayenne pepper
1 cup peanut or avocado oil
6 to 8 large shrimp, peeled and deveined
6 to 8 shucked oysters
Cut French bread into 2 (8-inch lengths and cut in half, lengthwise.
Spread butter on the inside of each bread slice.
Place on a baking sheet and broil until golden brown, then set aside.
In a bowl, add the egg and water and whisk with a fork.
In another bowl, mix together the cornflour, Creole seasoning, garlic powder, lemon pepper, sea salt, and cayenne.
Dip the shrimp in the egg mixture and then dredge in the cornflour mixture and set aside on a platter.
Do the same with the oysters.
In a cast iron skillet, heat oil until a small amount of flour immediately sizzles when you drop some in. You can also use a candy thermometer and let oil reach 360 degrees F.

Fry the shrimp for about 2 minutes on each side until golden.
Remove with a slotted spoon to a rack on a baking sheet.

Keep warm in a 225 degree F oven while frying the oysters.
Fry the oysters for about 3 minutes on each side until golden.

Spread the Creole Mayonnaise on the bottom and tops of each half of bread.
Add the shrimp to one bottom and oysters to the other, add some lettuce, and onion slices, and then add the top bread.
Serve with lemon wedges.
Serves 2