For years, my husband loved Bean & Bacon Soup in a can. I played with this recipe a few times until I think it is even better than the canned soup. Not only is it better, but a lot healthier without artificial ingredients. 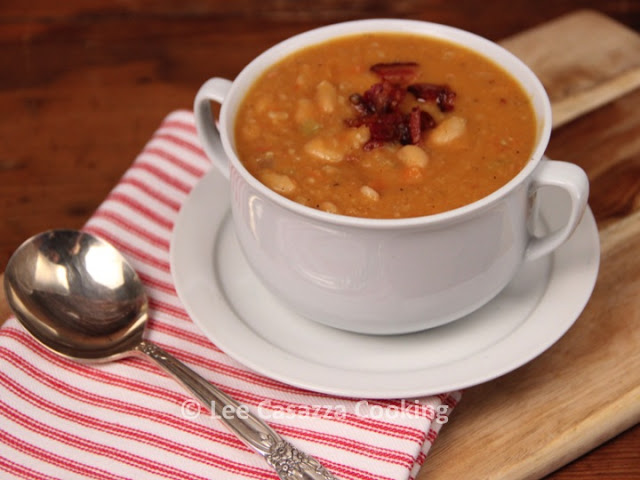 In a large heavy pot or Dutch oven, cook the bacon until crisp.
Remove with a slotted spoon to a bowl and pour off and discard all but 1 tablespoon of the grease.
Add the onion, carrots, and celery and sauté for 5 minutes.
Add the garlic and sauté another minute.
Pour in the chicken stock or broth, the drained beans, and tomato paste.
Season to taste with salt and pepper.
Stir to completely combine.
Bring to a boil, reduce heat, and partially cover with a lid.
Simmer for 30 minutes.

Using an immersion blender, blend the soup for just a couple of seconds to puree some of the beans.

Alternatively, you can carefully pour about 2 cups into a blender and puree, then pour back into the pot.

Add half of the bacon and simmer another 5 minutes.

Ladle into warm soup bowls and top with remaining bacon and serve.

When you cook your black-eyed peas with rice, it is known as Hoppin' John. The southern tradition of eating black-eyed peas for luck on New Year's day is believed to have started after the Civil War. It was first planted as food for livestock and the fields of black-eyed peas were ignored as General Sherman's Union troops destroyed other crops. It became a nourishing food source for the surviving Confederates who considered themselves lucky. Serve them with either, collards, mustard greens, or turnip greens, which represents paper money, and cornbread, which represents gold. Adding a shiny penny to the pot of greens just before serving will bring extra luck to the one who finds it. Flavor the peas with ham and bacon and the tradition is complete. These legumes are a good source of calcium, folate, fiber, and vitamin A. 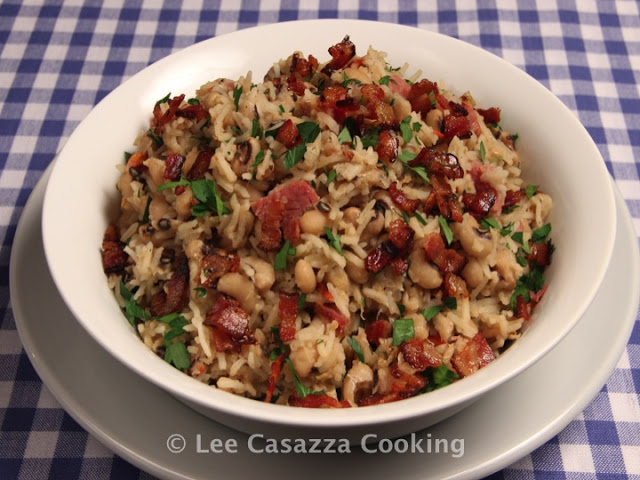 Pour black-eyed peas into a bowl and sort through them to make sure there aren’t any small pebbles.

In a saucepan, add the dried peas and cover with water to 2 inches above peas.
Bring to a boil, turn off heat, cover, and let sit 3 to 4 hours.
Drain the peas and set aside.

In the same saucepan, cook bacon pieces until crisp.
Remove with a slotted spoon and set aside.

Pour out most of the bacon grease and add the butter and sauté the onion, celery, and bell pepper for 10 minutes.
Add garlic and red pepper flakes.
Sauté another 2 minutes.
Add chicken stock, thyme, and black-eyed peas.
Bring to a boil, then lower to a simmer.
Cover and simmer slowly for 20 minutes.
Add rice and season to taste with salt and pepper.
Cover and simmer slowly for 15 minutes, add a little more chicken stock or water, if too dry.

Stir in the diced ham and spoon into a warm serving bowl.
Garnish with bacon and parsley and take hot sauce to the table.

Posted by Lee Casazza at 8:38 AM No comments:

Brunswick Stew was served at Virginia's tobacco-curing, sheep shearing, barn building, and other neighbor gatherings. The story goes that a hunting party in Brunswick County, well provisioned with tomatoes, onions, butter beans, okra, bacon, salt, and corn, left one man behind to have the dinner ready at the end of the day. He could only find a squirrel within range of the camp. So he shot it, cleaned it, and threw it into the pot with the vegetables. When it was served, all of the hunters agreed that squirrel was the finest and tenderest of all wild meats. Chicken is now substituted...and that's a good thing!
In 1775 my 5th great grandfather, Capt. David Chadwell appeared at the Colonial Capitol Building in the City of Williamsburg to testify against another man who stole his horse. I like to think that maybe that evening he dined at one of the taverns and had Brunswick Stew, probably with squirrel.

Lee's Kitchen Tips:
If you do not have or like okra, which also is a healthy thickener, just spoon out 3 tablespoons of the melted butter-bacon grease mixture into a small bowl and add 2 tablespoons of flour to make a paste. Use this to thicken the stew before you add the boneless chicken pieces.
You can make this stew with your favorite bone-in chicken pieces or 1 whole chicken, cut up. 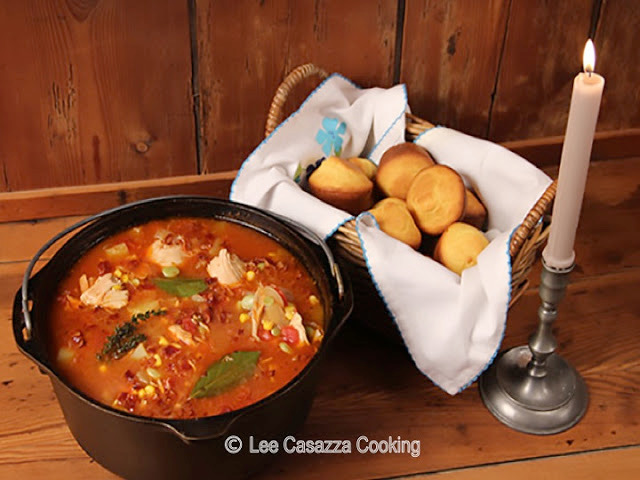 In a large cast-iron stew pot or Dutch oven, heat the oil over medium-high heat.
Add the chicken pieces and brown on both sides, about 5 minutes on each side.
Add the chicken stock, and water.
Bring to a boil; reduce heat to low and simmer, partially covered, for 1 hour.

Remove chicken with tongs or a slotted spoon and place in a large bowl to cool.
Pour the broth into a large pitcher or measuring cup.
You should have about 3½ to 4 cups of rich broth.
Leave the brown bits in the bottom of the pot.

In the same pot, fry the diced bacon until crisp, then remove with a slotted spoon and set aside. Discard all but about 2 tablespoons of the bacon fat.
Add butter to the pot with the bacon fat and let melt.

Add the chopped onion to the butter mixture and sauté for 10 minutes.
Pour the reserved chicken broth into the pot with the sautéed onions.

Meanwhile, remove pull the chicken off the bones into bite-size pieces and add to the pot.
Season to taste with salt and pepper.

Simmer another 5 minutes, add the cooked bacon bits and serve with cornbread muffins and hot sauce, if desired.

"Jambalaya and a crawfish pie and file' gumbo . . . " I love Creole food and my daddy loved that song by Hank Williams, but I think he was singing about Cajun-Style Jambalaya. Jambalaya is pronounced "Jum-ba-li-ah". Cajun-Style Jambalaya is more rural and can include a combination of crawfish, shrimp, oysters, alligator, duck, turtle, rabbit, squirrel, venison, and anything that was part of the hunt that day. Cajun-Style Jambalaya does not have tomatoes and has a roux base. Creole-Style Jambalaya has tomatoes. It originated from the French Quarter of New Orleans. This is best if you serve this on the day you make it. 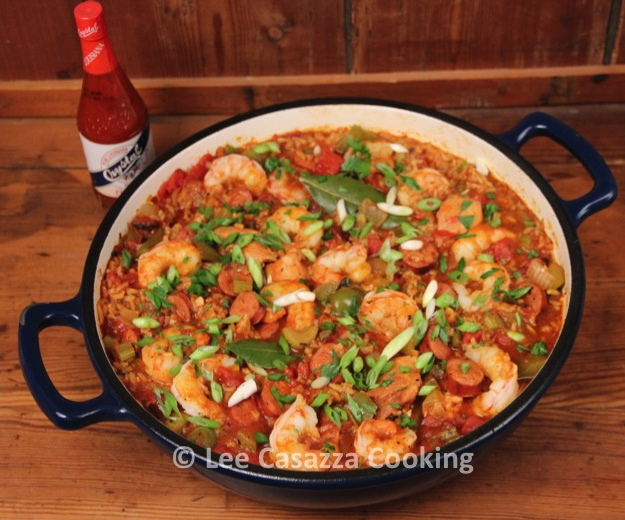 Reduce heat to medium-low and add the "holy trinity". . .onion, green bell pepper, and celery, and sauté for about 5 minutes. Add garlic, rice, thyme, and cook another 2 minutes. Add tomatoes, chicken broth, bay leaves, Worcestershire, Creole Seasoning, and paprika.
Return the browned sausage and chicken to the pot.
Season to taste with salt and pepper and stir to combine.

Briefly bring to a boil then reduce heat to very low, cover and simmer for 10 minutes.
Stir once and simmer another 5 minutes.

Add shrimp, cover and simmer 5 more minutes.
Turn off heat, keep covered, and let sit another 5 minutes. . .while you set the table.

Sprinkle with chopped parsley and sliced scallions.
Take the pot to the table and serve family style or spoon onto 4 warm plates.

I remember long ago having an open-faced tuna melt sandwich at Woodward & Lothrop Tea Room with my mom. This is one of my husband's favorite sandwiches. 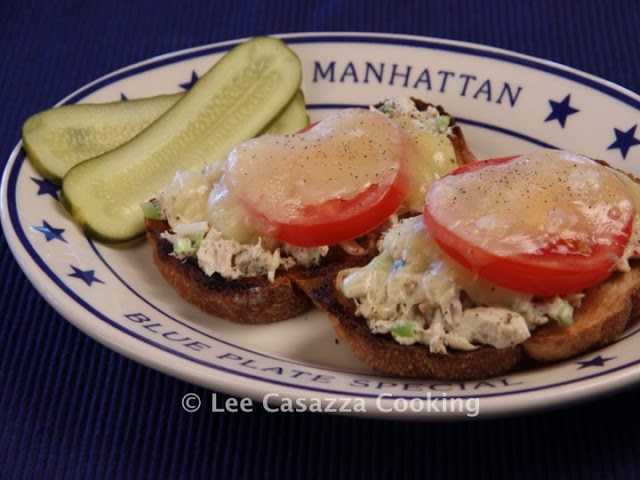 Drain water from can of tuna and spoon tuna into a medium-size bowl.
Break up the tuna with a fork and add the red onion, celery, mayonnaise, lemon juice, seasoned salt, lemon pepper, and celery seeds.
Mix until well combined.

Place under the broiler for about 3 minutes, or until cheese is nicely melted.

Cut each in half and serve with some potato chips and a pickle slice.

Posted by Lee Casazza at 3:59 AM No comments:

General Tso's Chicken is so popular in North American Chinese restaurants.  General Tso was famous in the Hunan Province of China.  The dish was created in the 1950s by a famous Chinese cook, Peng Chang-kuei, and brought it with him to the states in 1973.  The proper way to pronounce this dish is "General So", the T is silent...just like Tsunami "su-nami" and Tsawwassen "sah-wassen" Ferry terminal near Vancouver, British Columbia, Canada.
If you add steamed broccoli and rice, you have a complete meal. 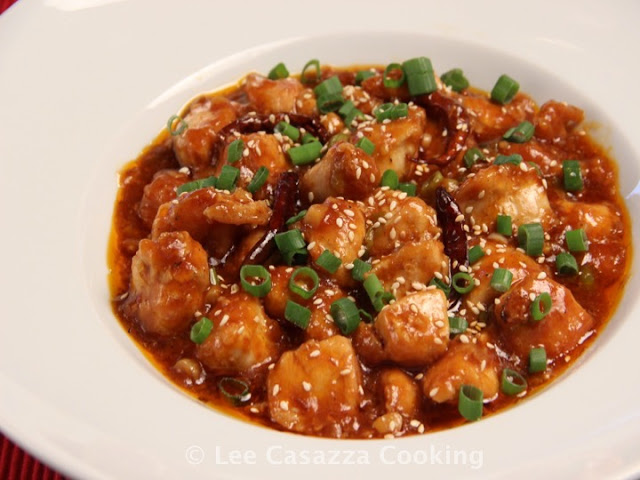 To Make the Sauce
In a small saucepan over medium heat, add the sesame oil, ginger, garlic, and white part of sliced scallions.


Sauté for a few seconds and add the chile peppers, chicken stock, sriracha, soy, hoisin, sherry or wine, tomato paste, and cornstarch.
Whisk sauce until it begins to thicken, about 2 minutes.
Turn heat to the lowest setting and set aside.

In a medium bowl, combine the chicken, cornstarch, and the whisked egg white.
Toss to combine and set aside.

Heat a large skillet or wok over medium-high heat half of the oil and add the chicken pieces.
Cook half of chicken for 3 to 4 minutes.  Flip chicken over and cook an additional 3 to 4 minutes.

Transfer chicken to a bowl and add the remaining oil and chicken and cook as directed.
Return the chicken in the bowl to the skillet or wok, add the sauce and toss to coat.

Remove chile peppers, if desired.
Sprinkle with the green scallions and sesame seeds.
Serve with cooked rice and extra sriracha, if desired.