I think almost everyone loves a good Reuben sandwich. Traditionally the sandwich is made with a Jewish Rye bread. I made it with one of my favorite Swiss cheeses called Emmentaler. You can buy a bottled Russian Dressing, but making your own is so easy and no artificial ingredients are added. Russian Dressing was invented in New Hampshire by James E Colburn in the early 1900s. He added Russian caviar which gave the dressing its name. There is a bit of a controversy on who created the Reuben. Whether it was created in Omaha, Nebraska or New York City, it is a well loved deli sandwich that you can make at home.

Lee's Kitchen Tips:
The delicious Swiss Emmentaler (or Emmental cheese) is a medium-hard cheese that is ideal for melting in a sandwich or fondu. Emmental is the name of the place in Switzerland. Emmentaler describes something from there. . .like America versus American. 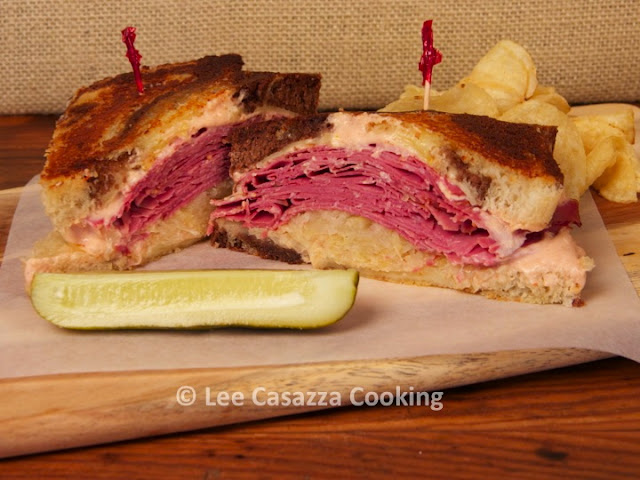 Mix all of the above ingredients together in a small bowl.
Cover and refrigerate until ready to use.

Spread butter on one side of 2 slices of bread.

Place two slices of bread, buttered side down, in a cold, large cast-iron skillet.
Add 2 slices of Swiss cheese to each.
Spread some of the Homemade Russian Dressing on the top of the cheese.

Divide the corn beef between each sandwich.
Add equal amounts of the drained sauerkraut on top.
Spread a little more Russian Dressing on top of the sauerkraut.
Add 2 more slices of Swiss cheese.
Top with the last 2 slices of bread and spread butter on top of the bread.

Using a large spatula, press down on the sandwich slightly to stablize.
Grill over medium heat until golden on each side and cheese is melted.

Cut in half and serve with a pickle and potato chips.